Should you book profits when a COVID-19 vaccine arrives? | Trade Nivesh 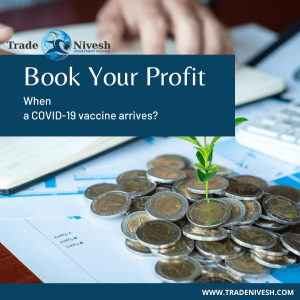 After Russia’s vaccine was announced on August 11, the market witnessed profit-booking on the next three consecutive sessions.

Russia became the first country to register its COVID-19 vaccine for public use on August 11 when Russian President Vladimir Putin announced that his country had developed the world’s first vaccine against COVID-19.

However, on unexpected lines, the market did not show exuberance on Russia’s claim of finding a vaccine.

After Russia’s vaccine was announced on August 11, the market witnessed profit-booking on the next three consecutive sessions.

Does it indicate that one should take money off the table when a final, widely-accepted vaccine arrives?

The majority of respondents of a social media poll, conducted by Trade Nivesh, is of the view that one should remain invested in the market even at that point.

In a poll, conducted on Twitter, 40.7 percent of the respondents said that one should invest more in the market when a COVID-19 vaccine arrives. However, there was a significant number of respondents who favored profit-booking.

Market experts have been of the view that the market will remain in an uncertain territory unless clarity emerges on a COVID-19 vaccine which is the biggest threat for the market and the economy across the world.

The Indian markets have rallied by almost 50 percent from the levels of 7,500 since March bottom. One of the reasons for the rally was that markets were expecting a medical solution to the problem in the form of a vaccine in the near future.

There are various promising vaccines in the works including one by Moderna and another by the University of Oxford both of which are in stage 3 trials and are expected to be available by the beginning of 2021.

Then why did the market not make merry when Russia announced a vaccine?

Amar Ambani, Senior President and Head of Research – Institutional Equities, YES Securities pointed out that the rally in the market was underpinned by fiscal and monetary stimulus and occasional correction is a normal phenomenon.

“The market was moving up due to global stimulus, fiscal and monetary, and that is continuing. Having run-up a lot, it is just taking a pause. It is not related to the Russian Vaccine at all, so you cannot link the two simplistically,” said Ambani.

Besides, there are still concerns over the effectiveness of the Russian vaccine as phase-3 trials are yet to be conducted.

“Concerning the Russian vaccine, some people still doubt the claims as they skipped the last phase of trials. Secondly, even if it is effective, no one knows how soon and how quickly it will be available. And, if it works also, will it have a lifelong impact or you need to administer it every year,” said Ambani.

“So, there is a lot of unknown. It is not simplistically linked. But even without a vaccine, the market was looking top-heavy. We believe the Nifty could still run up to 12,000 levels before a meaningful correction takes place,” Ambani said.

Jyoti Roy, DVP- Equity Strategist at Angel Broking also pointed out that there are still concerns on the vaccine as phase-3 trials are yet to be conducted.

“The Russian President announced that a Russian healthcare regulator had approved the vaccine, renamed Sputnik V, on the 11th of August. However, there are concerns over the vaccine as phase-3 trials are yet to be conducted. Therefore, given concerns over the Sputnik V vaccine, market reaction was relatively lukewarm,” Roy said.

Roy believes that it would be premature to state that a vaccine launch may be the best opportunity to exit.

“We believe that a quicker than expected solution to the COVID-19 crisis in the form of a vaccine will allow economic activities to normalise sooner than expected. This will lead to strong earnings growth in FY22 which coupled with retail, FII and domestic institutional flows can provide upsides to markets from the current levels,” Roy said.

“On the flip side, if the COVID-19 situation were to deteriorate from here then the economic recovery will be slower than what is being baked in by the markets. In such a case, we may see an increase in market volatility down the line,” said Roy.

Experts are of the view that the market may see a significant correction in case of a surprise or a shock as at present, the market seems to be looking at how to live in a COVID-19 world and how different the world will be after the pandemic is over.